A combination of brutal death metal, progressive metal and synth wave. A concept album about traveling through your dreams and experiencing the beauty & horror that exists within. 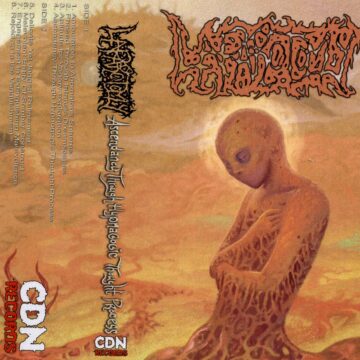 Now available on cassette • A combination of brutal death metal, progressive metal and synth wave. Give it a listen!

Laparotomy is a project by Darryn Palmer (Slamophiliac, Spilling Entrails, Perverse Imagery) and Justin McNeil (Murdered, Existential Dissipation, Necroexophilia). It started off in 2018 with Zack Shaw of Phalloplasty on vocals. They recorded a 3 track self-titled EP which was released digitally on Bandcamp. For their debut full length, Darryn wanted to do something more experimental, so Justin encouraged him to basically have free range and do whatever he wanted musically.

Being an eclectic music lover, Darryn did just that, resulting in the synthwave/progressive sound. Unsure of how to do vocals on such unorthodox music, Zack stepped down as vocalist. The band even considered releasing the album as an instrumental. After sitting on the material for a while, drummer Justin McNeil decided to take on vocal duties and spent many hours figuring out vocal patterns that would fit the music.

Finally, Ascendancy Though Hypnagogic Thought Process was done, and Zack Shaw mixed and mastered the album as originally planned. After release, the album took many by surprise as a refreshing combination of genres. Press that play button to hear the final result.

The Members of Laparotomy