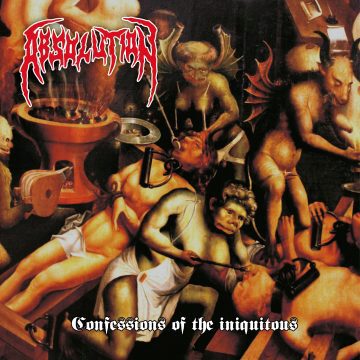 The first stable line up of the band consisted of Neil Hadden on vocals (a friend of Paul’s – Neil had previously auditioned for Benediction after Barney Greenway had left to join Napalm Death), Jason Woods on drums (previously with Birmingham thrash band Dawnblade) and guitarists Richard Harwood and Gorden Bicknell. It was this line up of Absolution that played their debut gigs with Leamington Spa death metalers Impaler and Warlord UK during 1992. This year also saw this line up of the band record their first studio recording – the 6 track demo Remittance Of Penance.

A few months after the recording of this demo saw the departure of Bicknell, who would shortly resurface in doomsters Esoteric (where he remains to this day). Bicknell was replaced by guitarist Mathew Hackett. Hackett’s debut gigs with Absolution were in late 1992 with the band supporting Cannibal Corpse and Bolt Thrower. The band parted ways with Adams in the spring of 1993. Absolution’s first gig without their founding member was in London supporting Gorguts and Blasphemy (guitarist Harwood temporarily taking over bass duties).

Adams was eventually replaced by a friend of the band, Richard Bailey, in May of 1993. Throughout 1993, Absolution continued to play throughout the UK with diverse band, from death metalers Benediction and Burial to hardcore bands such as Decadence Within.

August 1993 saw Absolution headline Birmingham’s now-defunct club Edwards No8 alongside Warlord UK, which would prove to be the band’s final gig in this first chapter on the band’s history. Shortly after the Edwards gig, drummer Woods quit the band. The rest of the band soldiered on to try and find a replacement drummer but the search eventually proved unsuccessful. The early part of 1994 saw Absolution officially disband.

In January 2015, Absolution parted company with bassist Andy Lawson. In the same month, the band entered the studio to work on a 3 track EP – Absolution’s first studio recording since their 1992 demo (with Harwood taking over the bass duties for the recording), Temptations Of The Flesh is now available via Bandcamp and Big Cartel.

There have been several other line-up changes. Dave Hudson (Spawned From Hate), Ian Davies (ex-Grimpen Mire) and Kane Corvus (ex-Rotting Repugnancy) have had all bass playing stints. Hudson left the ranks in 2017, whilst Davies departed in 2018 and Corvus in 2018. In 2014, William Stokes moved away to commence a University course. Pete Shortman (ex-Selfless, Scrage and ex-Nog) briefly filled the position. Stokes rejoined the band in 2016. Stoke’s return to the band was short-lived and he quit in 2017 (he how plays in Midlands death metal band Violated Flesh).

After a 24 year hiatus, Jason Woods, the original Absolution drummer, returned to fill the vacancy. 2017 has also seen Absolution sign a recording and distribution deal with CDN Records. Absolution continue as a 4-piece awaiting the recruitment of the right bass player to return the band to a 5-piece again. Neil Hadden was also vocalist with Cerebral Fix between 2016-2017, and featured on what turned out to be their final release (Disaster Of Reality) before the Fix disbanded in 2017.